When the guilty verdict was read, 17-year-old Dawnta Harris slumped at the trial table and began to cry.

A jury had found him guilty of felony murder in the death last May of Baltimore County Police Officer Amy Caprio. The West Baltimore teen was convicted Wednesday in a courtroom crowded with the slain officer’s family and fellow police.

One woman cried out in grief at the verdict. “Deputies!” the judge called. In the gallery, Caprio’s family sobbed. Defense attorney Warren Brown leaned over and hugged the shaking teen, whispering in his ear. It was an emotional end to the eight-day murder trial.

The ninth-grader from Gilmor Homes is to be sentenced in July. Prosecutors will seek life in prison, Baltimore County State’s Attorney Scott Shellenberger said.

The trial revealed that Harris rose out to Perry Hall in a stolen Jeep Wrangler, burglarized one home, then ran over the 29-year-old officer when she intervened. 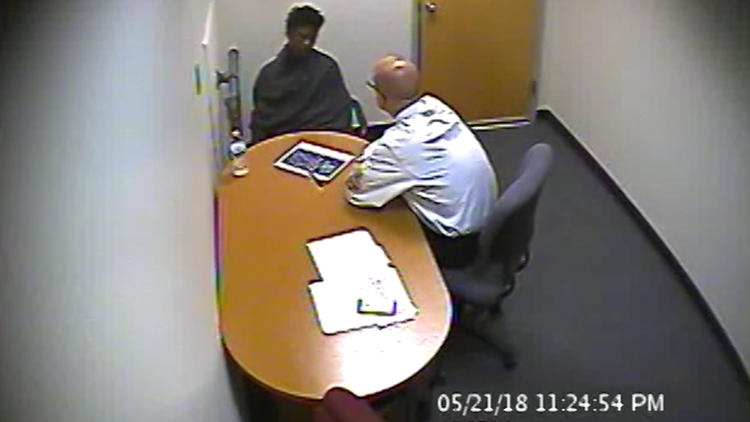 Outside the courthouse, Caprio’s father briefly thanked the jury but said the verdict won’t end the family’s anguish.

“This sort of thing, it’s not closure,” Gary Sorrells said. “We will live with this traumatic event.”

Condolences came in from county officials. County Councilman David Marks, who represents Perry Hall, released a statement saying Caprio would always be remembered. He said her death was a horrible crime. County Executive Johnny Olszewski said in a statement the trial was undoubtedly difficult for her family and the force. She was the first county officer to die in the line of duty in six years.

“While this does not bring back Officer Caprio, justice has been delivered,” Olszewski said.

Caprio is slated to be honored Friday at the 34th annual Fallen Heroes Day ceremony at Dulaney Valley Memorial Gardens.

She had been called to investigate a suspicious Jeep in Perry Hall and encountered the teen on a suburban cul-de-sac. Caprio blocked his way out with her patrol car, jumped out and ordered him to stop. The Jeep sped toward her and she drew her gun, screaming, “Stop! Stop!”

Harris stopped the Jeep and cracked the door as if to surrender. Caprio’s body camera recorded the confrontation. Then he ducked down and gunned the Jeep. She fired once through the windshield — she missed him — before he ran her over. 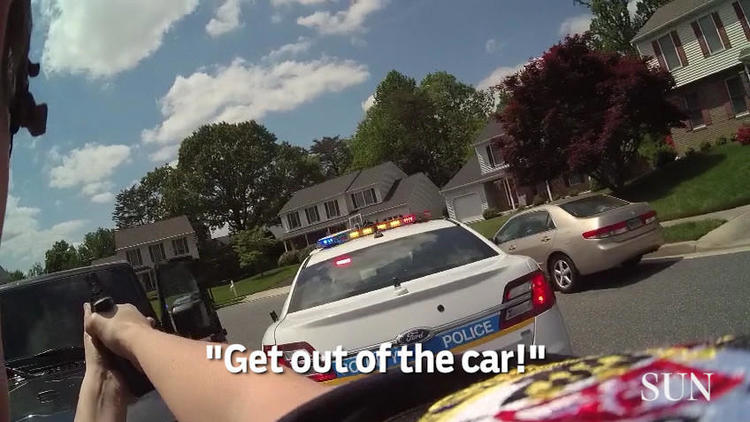 Harris ditched the Jeep nearby. He was walking down the street when police picked him up. First, he denied any knowledge of a Jeep or some teen burglars. But over 14 hours at police headquarters, homicide detective Alvin Barton teased out the truth. Harris admitted that he panicked.

“Once I seen the gun, I put my head down and closed my eyes,” he told the detective. “It was like five seconds before I pushed on the gas.”

Police charged Harris and the three other teens with felony murder. He was the first to stand trial.

An assistant medical examiner testified that Caprio suffered broken ribs and crushing injuries to internal organs. Neighbors testified that they found the officer of four years — a young wife and graduate of Loch Raven High School and Towson University — in the street bleeding with tire marks on her legs. 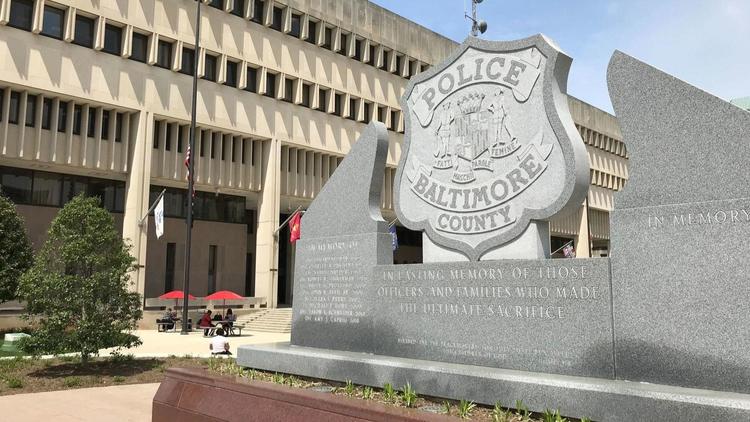 Her death set off a firestorm of debate, much of it racially charged. She was white; Harris, black.

“I got in this case a day after Officer Caprio died,” he told the jury, “after reading on social media somebody needs to string him up by his testicles.”

Deputy State’s Attorney Robin Coffin told jurors she was grateful they would decide the teen’s fate — not a lynch mob.

The case against Harris hinged on whether jurors believed the boy burglarized two homes with his friends before running over the officer. Prosecutors charged him as an adult with “felony murder,” meaning a felony crime in which a death is foreseeable — for example, when a burglar breaks into a home, awakens the owner and kills him in a struggle. Prosecutors had to prove not only murder, but the burglary too.

In his closing argument Tuesday, Brown conceded that the teen killed Caprio.

“It ain’t a matter of innocence. We know that he is responsible for her death and that’s between him and God,” Brown told the jury.

Instead, the defense attorneys sought to distance Harris from the burglaries, portraying him merely as a “dumb kid.” They said the teen didn’t ask too many questions when he hopped in a snazzy Jeep with his pals and went joyriding in the suburbs. Even when the other three began burglarizing homes, Brown said, Harris waited in the car.

“It’s not in his spirit to hurt anybody. That’s why he didn’t go up in these homes,” Brown told the jury. 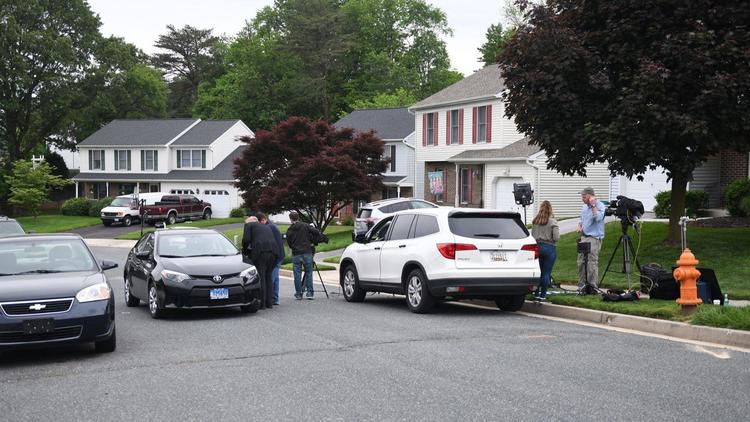 Coffin, however, described Harris not as a naive teen hiding in the Jeep but as the lookout and getaway driver. She showed the jury text messages and phone call logs between Harris and the teens inside. He waited outside in the Jeep for 42 minutes while the teens burglarized one particular home, she told jurors.

“The defendant wants you to think he had no idea what’s happening,” Coffin said. “To suggest that he’s not a primary actor is absurd.”

The jury found him guilty of burglarizing one of two homes — enough to convict him of felony murder.

Harris did not testify during the trial. A slight teen, he sat through trial with his eyes down, writing on a legal pad and speaking softly to his attorneys. Most days, he was the youngest one in the courtroom.

The defense attorney said he hopes the verdict brings some closure to Caprio’s family.

He held up the small pants — size 30 length.

“Everyone out here has made mistakes at 16,” he said.

Still, Gordon said he was satisfied: The teen wasn’t railroaded into a guilty verdict.

Defense Attorney Warren Brown on the guilty verdict for Dawnta Harris. https://www.baltimoresun.com/news/maryland/baltimore-county/bs-md-dawnta-harris-verdict-20190501-story.html … 111:28 AM - May 1, 2019

“The vitriol and the hatred was so pervasive,” he said, “many thought it would be difficult to get a fair trial.”

The defense attorneys pledged to appeal the conviction.

Caprio was the 10th officer killed in the 144-year history of the county police department. She was the first to die in the line of duty since Jason Schneider was gunned down while serving an arrest warrant in Catonsville in 2013. After Caprio’s death, Baltimore County Police Chief Terry Sheridan said he received calls from the White House and Attorney General Jeff Sessions.

Condolences poured in from around the world last May. During trial, both sides praised Caprio’s courage. She stared down the oncoming Jeep and forced Harris to stop — if only briefly.

“You’ve got an officer who gave her life in the line of duty. You’ve got a kid that is lost and finds himself in this type of predicament,” Brown said. “The whole thing is a tragedy.”

Outside the courthouse, Brown said he hopes Harris’ story reaches other teens.

He hopes the tragic case becomes a cautionary tale.